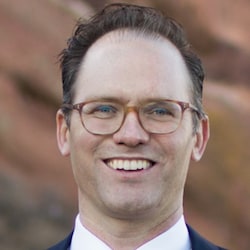 Brian Bradford is a Colorado native and trial lawyer forged from years of service as a Public Defender and fighting powerful insurance companies as a leading attorney with one of Colorado's largest personal injury law firms. As a personal injury lawyer, Mr. Bradford has recovered tens of millions of dollars from insurance companies on behalf of his clients. He has completed numerous jury trials in jurisdictions throughout Colorado and has been specially licensed to practice law pro hac vice in Oklahoma and Florida. Early in his legal career he also worked for Colorado state and federal trial court judges, including serving as a law clerk for the Honorable Rebecca Love Kourlis while she was on the Colorado Supreme Court. Mr. Bradford's clerkship experience gives him unique knowledge about how judges decide legal issues which provides great benefit to his clients.

After graduating from Cherry Creek High School where he played on the 1994 State Championship football team, Mr. Bradford received his business degree from Bucknell University in Pennsylvania. Mr. Bradford then headed west to Washington state where he received his law degree Magna Cum Laude from Gonzaga University. Mr. Bradford is also a graduate of the prestigious Trial Lawyer's College, which provides specialized training to trial lawyers from around the country. Mr. Bradford maintains an extensive network of plaintiff's lawyers across the United States with whom he regularly collaborates to augment the value of his clients' cases. He is a member of the Colorado Trial Lawyers Association, the Colorado Bar Association, and the Boulder County Bar Association where he has presented to other lawyers on topics ranging from Subrogation Law to the intricacies of Underinsured Motorist Coverage. Mr. Bradford values giving back to his community, regularly presenting to local high school students on the dangers of distracted driving, as well as various programs encouraging students to enter the legal profession.

Thinking Ahead: Being Prepared for a Personal Injury Claim